This document, produced in 2019 by RESLAC, compiles, releases and reflects on the role of civil society in different truth commissions in the region. In addition, the dialogue with experiences from Africa is included: the case of Sierra Leone and South Africa 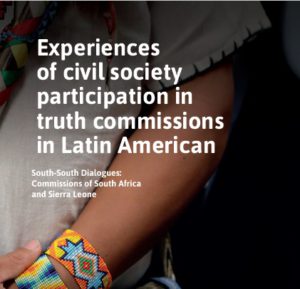 The present work was thought within the framework of the accompaniment to the peace process in Colombia defined in 2017 by the Network of Latin American and Caribbean Sites of Memory (RESLAC) as one of its strategic objectives, after the negotiations between the Colombian government and the Revolutionary Armed Forces of Colombia-People’s Army (FARC-EP) will conclude with the signing of the Final Agreement for the Termination of the Conflict and the Construction of a Stable and Lasting Peace in November 2016.

This work has the objective of building knowledge about the role and specific contributions that civil society, and especially victims’ organizations, have developed in the region. It is not a research or academic work, nor does it pretend to be exhaustive, but rather to give an account of some of the experiences of truth commissions in our continent, emphasizing the possibilities and potentialities of social accompaniment to the construction of memory and truth. To complement the Latin American and Caribbean perspective, two relevant experiences from the African continent were included, from the link with organizations from South Africa and Sierra Leone, also members of the International Coalition of Sites of Conscience, who shared in the last assembly of our Network the ways in which civil society in their respective countries was inserted in the Truth Commission processes that went through them.

Document accessible at the following link: